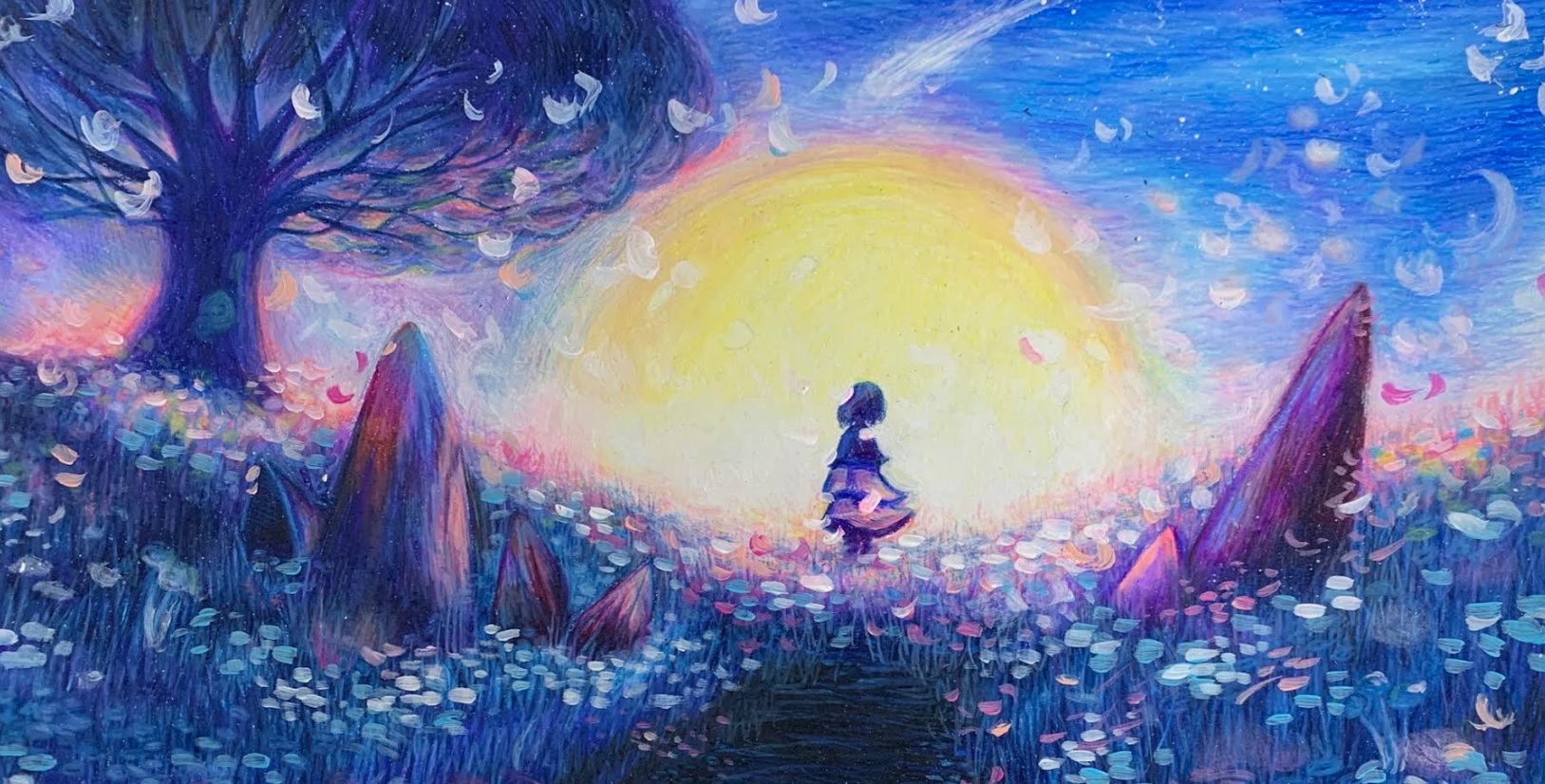 It was a cold January night, deep in the heart of a barren wasteland when they rose. An inky nightfall swept the land, the wind howled like never before as the sand dunes split open to reveal large bodies, ashen and shriveled. Some were hulking and beastly, rib cages sharp and heaving like a winter song. Others were as thin and pale as alabaster. Skin and fur peeled away from frostbitten bones, only moving by the sheer willpower of their fallen souls. Those who had the skulls of the Great Beasts were mightier than the others, both by size and power. Five leaders; the bird Volucris, the lion Leonis, the snake Serpana, the fish Ophthalis, and the stag Arietes. They were both humanoid yet animalistic, with bones that would shift with their movements like flesh. With the sounds of their awakening cries, the sky was set alight with their mourning. From that day on, they began to hunt, their hunger never satisfied as they sought town after town. Tales of their destruction never got far, all incoming travelers saw were empty towns seemingly abandoned overnight. Outgoing travelers? There were none to leave the ghost towns.

Arietes’ skull gleamed in the light as their golden antlers stood tall and regal. The moonlight cast long shadows over the hills, the willows on their antlers whistled still. The stag demon was the fastest, running over the land in seconds on end with mighty hooves of steel but no ill intentions to create destruction without gain. They knew their family would not survive: the humans had taken the livestock from the fields, the grass from the ground, the food from the Earth. The humans had forced themselves into a corner, their own greed and control had made them the sole food source for the demons. And for a while, they feasted, the humans never seemed to dwindle but of course, that did not last. After all, nothing good did.

And the demons hungered.

While large and heaving, the beasts were not fast and could not go far from their den for they would be reduced to unmoving bones. Only the leaders had powers of God, Volucris was a demon by the skies, fast and invisible. Leonis was stealthy and dangerous, pressed upon the  golden wheat. Serpana’s deaths were quick and silent, death came fast and unforgiving. Ophthalis was a demon by the seas, with jaws with the ability to break the toughest of bones. Arietes was a demon of the wind, leaping across mountains and sweeping the heavens. But no matter how much power they held, they could not save the others. Slowly the demons fell one by one and their decaying bodies were deprived of their stolen souls. That was when the heads had to act; Arietes gathered Volucris, Leonis, Serpana, and Ophthalis and they spoke with God in reflection of the lake.

They would each be gifted a miracle, miracles that would save their family. The leaders were old, they had lived past their time and it was time to pass their roles on. The miracles would know what to do, each will take the skulls of their predecessors. The miracles would be when the skies turn dark with ash and the villages emptied. The first human turned demons. Arietes had felt relief like none other.

Years later, the leaders had given up hope, alas no miracle had come.

With a solemn cry, the demons sang by night, “God had abandoned us, for our souls are not worthy”. Until that fateful afternoon day, the sun blazing and the fire screamed amok. Arietes had brought a hunting party far from the den, only to find a village in flames. The smoke covered the sun and the sky rained ash. It was when the dust settled when Arietes found her, a small girl of 9 years. Long brown hair and broken chocolate eyes, soft skin unscathed, spared from the heat of the raging fires. Though her soul was unblemished and loved, the torch in her hand said differently. She didn’t understand the consequences of her actions but she had a fire burning in her that drew Arietes to her. Arietes took her into their bony arms and she joined them without a second thought — it dawned to Arietes that this was their miracle. Not a brave human soldier or a royal king or a brave traveller but rather a small girl with a loving soul. A soul that would not decay after years of torment and sorrow. The difference between the girl and the demons was that she had felt love and she would continue to feel love, and joy, and anger, and indifference, and sorrow. Ariestes held her close and touched their skulls together, she would not take on their mantle for years to come. Not because she was unworthy but rather that she deserved to live her young life to the fullest, the stag’s skull was both a reward and a burden to those who wear it.

“Young miracle, it is my honor to meet you finally. How do you wish for me to address you, my dear?” Arietes did not speak with a voice but rather their meaning was communicated in silence. The two opposite beings had just met and yet they had created a bond so strong, so destined. With a bow, Ariestes bent down on one knee.

“Mister, you look funny! My name is Eleanor but you can call me Nellie, do you wanna be friends?” Nellie giggled her bubblegum smile and took Arietes’ hands in hers. Arietes cocked his skulled head to the side at the childish notion (though he agreed to her offer wholeheartedly).

“Very well, young Eleanor. Those who know me know me as Arietes, I will be your… friend.” It quickly became clear that this was the beginning of the end, as they walked hand in hand into the den of the beasts. Each side were thousands of colored eyes flickering and staring but Nellie paid them no attention as she told Arietes all about her favorite stories.

Nellie wasn’t dumb, she was young but she already held the world on her shoulders. Her dreams were filled with the running of nimble animals, swift as the wind yet burning with energy and yearning. Nellie didn’t know what they were but she felt a kinship with them as she felt with the fire. Stags. Her mind whispered. Stags. Nellie agreed. Her still hands held a torch, trembling from the cold and the darkness of the room. Her round cheeks were pink as a peach and her clothes were dirty and tattered. There was no food in the small house, she had checked multiple times.

The village was not kind to her, they called her evil, a demon. All because her parents foolishly tried to burn her at the stake, convinced she was a monster reincarnate. Only, Nellie had come out unscathed and promptly abandoned to rot alone. Fire was not evil, fire was a friend. The village was not a friend. Nor were her parents. Nellie knew not of religious preachings but she understood that their God was not her own, their God was cruel to those who were peculiar.

They’re coming for you, prepare. Nellie knew instinctively that this was not a warning but rather a hopeful omen. She didn’t understand who “they” were but she was prepared.

Stags. The voice in her head whispered. Stags. Nellie agreed.

Nellie was fast, she outran the villagers the night before they came. With a single torch, she ran in the cloak of dusk and one by one, set the village alight. With a yet innocent soul, unbewitched by her circumstances, she got her revenge. The village repaid their debt to her with their heinous lives. Those who once wished for her to burn awaited their retribution. Nellie’s solemn face stared into the flames, yearning for the stags to whisk her away from her nightmares.

And they did not keep her waiting.

The other leaders were joined in the den, each with a child with neither fear nor immortality in their gazes. It was a queer sight, each horrifying monstrosity held with them an angel of purity and innocence that loved them all the same. It was intriguing how these children had claimed these beasts as family, never a speck of uneasiness in their eyes. Arietes turned to look into Nellie’s shining eyes and pearly white teeth and decided that they wanted it no other way. Sarah, Josephine, Eli, Alistair, Nellie… just little children who chose a life of torment and misery. Or possibly not.

The children were fifteen years old when they took on the leaders’ burdens. Nellie was first to claim her title, she took Arietes’ skull with pride and became Cervelli the Second Stag Demon. Her golden antlers shone like sunlight, the pale willows fell off and in their place grew soft yellow Coreopsis petals and Spring Crocuses. The rest followed behind, Aviserah the Second Bird Demon, Leaphine the Second Lion Demon, Angelis the Second Snake Demon, and Natanalli the Second Fish Demon. The leaders let their bones fall in crumbling piles of ash and float away into the wind. But Nellie was never alone, she held the spirit of her mentor in her skull and for once, both of them were at peace. They became one and the same and she had wished for nothing more. The night brought acid rain and smog so heavy that it created a labyrinth for the forgotten. The sand skittered like a nest of spiders as the Earth opened. Out crawled boney hands and dark claws and anguished cries, bodies of distorted old souls and new souls. Familiar souls and unrecognizable souls. The stag reached out her soft human hand and grinned a bubblegum grin.

“It’s nice to meet you, my name is Cervelli. Do you want to be friends?”